Leonardo’s Life By The River

You are here: Home1 / Walking Tours Milan2 / Leonardo’s Life By The River

Leonardo’s Life By The River

Discover the spot of paradise along the river Adda where Leonardo da Vinci spent few years of his life. Vaprio d’Adda is just 30 km east of Milan; immersed in art, history and nature, you’ll visit the place where the Renaissance Genius made many detailed studies and, according to some scholars, Mona Lisa was painted…

On the banks of Adda river and the canal, named naviglio in Lombardy, Leonardo studied nature and the movement of water.  He created a series of sketches, drawings and manuscripts, which are now collected in the famous Leonardo da Vinci’s Codex.

In addition, Leonardo planned a canal system connecting Milan with the main rivers, the large lakes in northern Italy, and finally with the sea.  The resulting network of canals and the transport by ship made the fortune of Milan, with an enormous commercial importance. 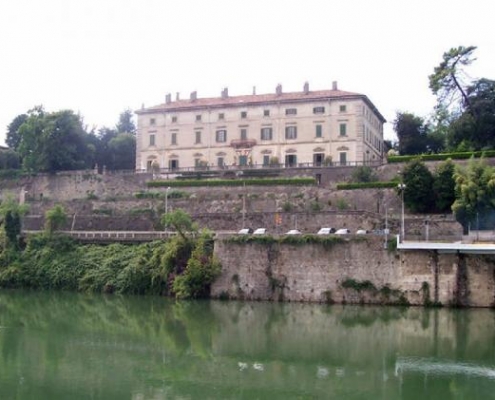 Leonardo stayed at Vaprio from 1508 to 1513, at Melzi’s Villa.  His pupil was the young Francesco, the son of this noble family and a painter himself.

Besides Melzi’s Villa, walking along the Martesana Canal and surrounded by a gorgeous nature, we’ll see many other holiday residences of the Milanese aristocracy, learning about their glorious past.

In our walk we’ll continue visiting the 17th century building where the Duke of Milan’s authority ruled the canal system and the use of water.

Notably, the building offers some exhibits about Leonardo and a Multimedia Gallery with interactive copies of the Atlantic Codex sketches

Actually, this is probably the location from where he drew one of his famous sketches: the project of a chain ferry crossing the river Adda.  You can even imagine Leonardo at work, with his tools and his creative genius.

All these drawings belong today to the Windsor collection (England).

A hidden gem of art, history and nature, apart from the most popular touristic trails. Leonardo is waiting for you!

Booking:
If you would like to book the special tour in Vaprio and discover one of Leonardo’s most beloved places, please write to Guided Tour Milan or use our form.

Evening Tour of the City Centre

Leonardo Parade: Da Vinci’s Art & Science
Scroll to top
We and selected third parties use cookies or similar technologies for technical purposes and, with your consent, for other purposes as specified in the Cookie Policy. You can freely give, deny, or withdraw your consent at any time by clicking "Manage Consent" at the bottom of the page. You can consent to the use of such technologies by using the “Accept All” button or deny and close the notice by using the "Reject All" button. Settings

Reject all Accept all
Manage consent

This website uses cookies to improve your experience while browsing the website. Of these, cookies that are categorized as necessary are stored in your browser as they are essential for the basic functionality of the website to work. We also use third party cookies that help us analyze and understand how you use this website. These cookies will be stored in your browser only with your consent. You also have the option to disable these cookies. However, disabling some of these cookies may affect your browsing experience.
Necessary Always Enabled
Necessary cookies are absolutely essential for the website to function properly. These cookies ensure basic functionalities and security features of the website, anonymously.
Analytics
Analytical cookies are used to understand how visitors interact with the website. These cookies help provide information on metrics the number of visitors, bounce rate, traffic source, etc.
Save & Accept